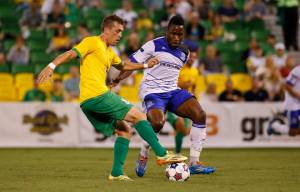 For a brief, flickering moment against Edmonton it appeared that the Tampa Bay Rowdies had solved their offensive woes and were on their way to notching some goals. In the end though, the Rowdies promising start netted nothing and they had to settle for a deflating 1-1 draw at Al Lang.

With Shane Hill out due to an abductor muscle injury, Ricky Hill decided to shake things up and made the switch to an attack minded 4-3-3 formation. Hill started with Georgi Hristov, Casey Townsend and recent signee Corey Hertzog as the three forwards up top. The first midfield all year to not include Shane Hill consisted Darel Russell in the center, with Blake Wagner and Keith Savage on the left and right wings respectively. The tactical shift looked as if it would pay off almost immediately. The Rowdies came out flying with terrific intensity that had the normally resolute Edmonton  back four scrambling. The first 25 minutes of the match were the most dangerous the Rowdies have looked since their 2-0 victory over Ottawa way back on August 30th. The movement form all three forwards in that first stretch was fantastic and led to the Eddies constantly being stretched and forced into emergency defending situations. The stretch of play also produced some of the best play from the midfield wings in a long time. Savage and Wagner didn’t fall into the trap many players on the wings for the Rowdies have many times this season of settling for simple runs down the sideline and easily cleared crosses into the box. They continuously put the Eddies defense on its heels by swapping sides with one another and exploiting passing lanes to connect with the forwards.

Unfortunately none of this quality play resulted in an actual goal. The Rowdies lone goal came from an iffy penalty on Eddies defender Kareem Moses in the 67th minute that Hristov had no trouble burying into the net. Truthfully though, besides that penalty Eddies keeper Lance Parker was only forced to make one other difficult save the entire game. In the 26th minute Hristov directed a dipping free kick from just outside the box towards the lower corner of goal but Parker made the diving deflection to deny the Bulgarian. The fact that this was the only true threats Parker dealt with all night would suggest that the same old issues plaguing the attack haven’t gone anywhere. In comparison Rowdies keeper Matt Pickens was called upon to make several point blank and reaction saves. This is in spite of the Rowdies having 8 shots on target to Edmonton’s 6. The quality of shots from the Rowdies has not been good enough. They haven’t been putting opposing keepers in uncomfortable positions nearly enough. As a result the team has not scored a goal in nearly 300 minutes of open play.

The Rowdies settled for shots from the top, or well outside, of the box far too often. The Eddies looked most vulnerable when Tampa Bay was quickly interchanging with the ball on the ground. That last part cannot be stressed enough. The Rowdies success with chips and long balls is so low that it may as well be nonexistent. It seems obvious that the guys in green and gold should avoid the long ball at all cost. The team seems to be lacking both patience and inspiration once it gets itself into a scoring position. Multiple players sailed shots out of play, failing to teammates making good runs into open space or wait for more help to arrive. The lack of composure and creative instinct in the opponents box could very well be the death of the Rowdies playoff hopes this year.

The defensive performance was also, unfortunately a familiar one. The back line was solid through most of the match, but was exposed several times on the counter attack. Willie Hunt replaced JP Rodrigues at center back and Jordan Gafa made his first appearance of the NASL season at right back. Gafa proved effective in the attack and came up huge in many of the one on one challenges he face. However, he was caught too far inside a few times, including the sequence that lead to the Eddies goal in the 43th minute. On a counter Gafa left Lance Laing with too much space down the Rowdies right flank leading to a seemingly innocuous cross into the box. The cross first went to forward Tomi Ameobi, and then Neil Hlavity, who tried to deflect a header onto goal. Pickens brilliantly blocked Hlavity’s attempt with a reflex deflection that would have been a play of the week candidate had it not ultimately ended in a goal. Sadly, Pickens’ deflection bounced right into the path of a wide open Chad Burt who never thought twice about one timing it straight into the net. The blame for the goal can be spread throughout the back line. Left back Anthony Wallace could’ve have been stringer when trying to dispossess Ameobi. And the fact that Chad Burt was so wide open is inexcusable. One of the center backs or possibly Darel Russell needs to step up in a situation like that.

Still though, the defense for the Rowdies is putting in performances deserving of more and it must be frustrating for Pickens and his back line to see opponents capitalize on the few chances they allow. They will have to put in another stout effort against the potent Strikers attack and hope that the attack can somehow find a way to score more goals in the quick turnaround before Wednesday’s Coastal Cup decider.