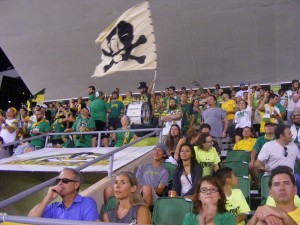 Rejoice, Rowdies fans. The Rowdies 2015 Coastal Cup campaign is set to kick off this weekend with the green and gold’s first-ever league action against Jacksonville Armada FC. Incidentally, if you fancy yourself a creative person, this new (hopeful) rivalry between the Rowdies and Armada needs a name. The Coastal Cup is the competition between all three Florida NASL teams and the matchup between Jacksonville and Fort Lauderdale has already been dubbed the “Battle for the Atlantic.” If you have a worthy suggestion, then send it our way. If it ends up being used you could win the first ever Unused Substitutes No-Prize!

Tampa Bay already faced Jacksonville this year, grabbing a 2-0 win from in the unsurprisingly sloppy preseason finale. Since the season officially kicked off the Armada have experienced a high-inducing 3-1 victory over Edmonton in front a NASL record crowd at home and the blow of tightly contested 2-1 loss to Fort Lauderdale.

Jacksonville last weekend out with a bye so they’ll should be rested and ready to go for the Coastal Cup showdown on Saturday. The team currently has no reported injuries, and center back Lucas Trejo will be available after having his stoppage time red card in the match with the Strikers rescinded.

The Armada have started the same 11 players in both of their matches. With an extra week to ponder and tinker after a loss the Armada may be ready to make some changes. Highly-touted signing Marcos Flores has shown leadership and occasional creativity, but he looks a step slower than many of his teammates. Former FC Tampa Bay player Pascal Millien may be in line for a start after impressing as a second half substitute against the Strikers.

The Rowdies will need to be cautious of Jacksonville’s speedy fresh legs during the match. Co-Head Coaches Guillermo Hoyos and José Luis Villarreal (Not a mistake. They really have co-head coaches) employ one of the most aggressive systems in the league. With players like Millien, Jemal Johnson, and Keita they are fast in nearly every position on the field. The Rowdies will once again need to be disciplined defensively and not allow any attackers to get behind the back line to keep the visitors in check.

The bright side is that the aggressive style from the Armada means there will likely be acres of space between their midfield and back line. Fort Lauderdale had success implementing their quick, possession style in their win two weeks ago. The Armada’s lack of a true holding midfielder leaves them exposed, something that should excite any of the Rowdies attackers. The Rowdies haven’t shined on the counter attack, but they have the necessary speed to do so. They did manage burn the Armada for a nice counter attack goal in the preseason.

While Jacksonville is one of the quickest rosters in the league, they certainly do not have a physically imposing one. The Rowdies decided height and physical advantage from the new roster additions should give them an edge on set pieces and most 50-50 challenges.

What to Watch for