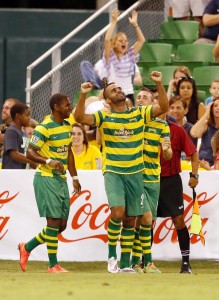 The first official completive match between the Tampa Bay Rowdies and Jacksonville Armada FC got off to wild start, and then managed to finish off with even more theatrics. Ultimately, the Rowdies pulled out a 3-2 win behind a Maicon Santos brace and a brilliant individual strike from Martin Núñez.

The opening minutes of the match were evenly contested. Forward Zak Boggs, making his first start of the season, nearly helped steal a lead for the Rowdies in the 2nd minute when he delivered a dangerous ball right to the feet of an unmarked Santos in the box. Santos tried finessing the ball into the net, but his attempt was denied by the post.

Santos didn’t have to wait long for another opportunity to open his Rowdies scoring account. In the 12th minute the Brazilian received another cross in front of goal, but Jacksonville’s Fabricio Ortiz was called for a penalty on his attempt to disrupt the finish. Santos stepped up and buried the penalty with conviction, seemingly setting up a start in direct opposition to last week’s loss in New York.

Unfortunately, that hope was dashed away only two minutes later when Jacksonville earned a penalty of their own on an ambiguous call on Tamika Mkandawire. Tam appeared to stand his ground just inside the box when forward Keita collided with him. Rowdies keeper Kamil Contofalsky guessed right and timed his dive perfectly to deflect the penalty from Marcos Flores. The deflection, though, bounced right back into the path of Flores for the easy tap in.

Things deteriorated quickly for the Rowdies after the Armada’s initial goal. Similar to the game in New York, the team was ceding too much space in the midfield and carelessly giving the ball away shortly after winning it. Jacksonville was happy to take advantage of the gift they were given and proceeded to dominate the remainder of the half.

The Armada broke through again in the 32 minute a fluke deflection off of Tam’s back leg bounced to Jemal Johnson behind the defensive line. Johnson almost scuffed the chance, his shot bouncing off both post before finding the net.

The silver lining of the first half was how ineffectual Jacksonville’s attack appeared despite the midfield dominance. Other than the goals, every shot they took in the first half was from distance. With a first time starter at left back in Rich Balchan, the Rowdies back line appeared to bend without breaking.

After three and a half matches of mixed results Thomas Rongen decided it was time shake up the Rowdies formation at halftime, specifically the midfield set up.

“We went from a 4-3-3, 4-1-2-3, whatever you want to call it, with Georgi Hirstov and Martin Núñez as attacking midfielders, and two players out wide, and Maicon. It just wasn’t happening for us on both sides of the ball. We struggled with possession. We get up 1-0, then we give away, way too fast, another goal and they go up 2-1,” said Rongen.

“We decided to stay with the same personnel, and went with a 4-4-2. We played Núñez on one flank, played Boggs on the other flank, Marcelo Sargosa as a true number six, and all of a sudden the roles were a little bit more defined for us defensively. And also, with the ball, we started to get a little joy as well.”

The adjustments took a little while to pay off, but after steady progress over the first 15 minutes of the second half, the Rowdies were able to equalize. In the 59th minute Núñez intercepted a sloppy clearance attempt at the top of the box, took two tiny touches to set himself up, and fired a lovely curling ball to beat Armada keeper Miguel Gallardo. Núñez impressed in both of his prior appearances as a substitute. In his first start for the Rowdies on Saturday he made an even more convincing case to be a consistent starter.

The game winning goal in the 77th minute is a strong contender for the best moment of the young season. After a first half of abysmal build up play, the Rowdies put together a beautiful exchange of passes that started with Contofalsky giving a short outlet to left back Ben Sweat, and culminated with Santos powering the ball into the net off a perfect delivery from Hristov on the byline. Not a single Jacksonville player touched the ball during the swift buildup.

After the goal Rongen gave a fist bump in the direction of Santos. It was a rough debut for the forward last week, but the team still has understandable high expectations for him. He showed up massively when it counted on Saturday, in his first match in front of the crowd at Al Lang.

The final stretch of the match, including seven minutes of stoppage time, was far from smooth sailing for the Rowdies. Jacksonville started applying pressure immediately after Santos’ goal and were smelling blood in the water when Contofalsky had to leave the match with an injury in the 90th minute.

Off the bench came 2014 starting keeper Matt Pickens. Luckily, for Tampa Bay, Pickens has the nerves of the of a keeper who has been around the block before. In the face of an overloaded box, Pickens was asked to make a handful of essential saves that secured the win for Tampa Bay.

Next up, the Rowdies face their first back to back road trips of the season, first at Carolina and then Ottawa. That, coupled with the Cosmos dropping points on the road in Atlanta, means these three points from Jacksonville were crucial if the club still has hopes for the Spring title. Plus, from a fan perspective, it’s nice when you can launch a new rivalry by leaving the visiting supporters deflated for the long bus ride home. 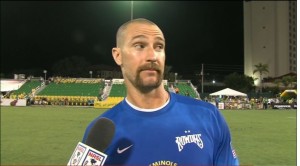